Just notice that LAMPP on Ubuntu is Case Sensitive.

Which means when you deploy your application containing folder path or file path,
do takes note the folder or file name.
at 5:51:00 PM No comments:

Today my college asks me where is the ruler in Ms Outlook new email composer.
Wow.. Good question, I take sometimes to search around and finally found it there! 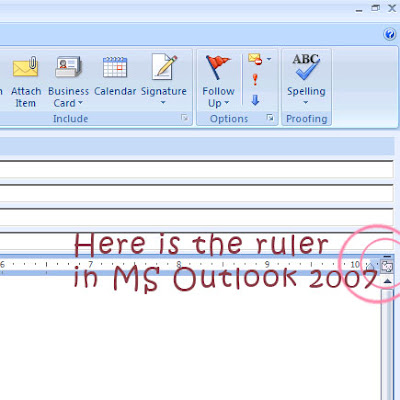 Get a free download copy of plug in here.
http://www.telegraphics.com.au/sw/dl.php3?file=ICOFormat-1.6f9-win.zip


Recently trying to research which tool is great to create video tutorial.
Personally I feel that video tutorial is much more better than text base in perspective of user understanding.

Let's watch this video, created by me :P

The Gigapan process engages with you in four steps:

Starting right now, you can search, browse and explore all of the panoramas that are available on the GigaPan sharing site. Dive into the panoramas to explore for yourself, or explore other users' snapshots to see what others have found.

As soon as you create your free user account, you can not only explore, but you can also annotate and share your discoveries by creating new snapshots and describing what you have found. This is a way to take part in the GigaPan community even if you have not done panoramic photography yet.

We are beta-testing prototypes of the Gigapan robotic mount, which attaches to your small digital camera to create a fast and easy-to-use high-resolution panorama capture device. We are growing the beta process and are negotiating concerning general release and sales of the Gigapan camera. You will be able to purchase these low-cost robotic mounts and take several hundred or thousand images at a time to create panoramas with one billion pixels and more.

You don't need specialized GigaPan hardware to take your own panoramas. If you have lots of patience, a high-quality digital camera, and a good tripod (or very steady hand!) you can take hundreds or thousands of overlapping, zoomed-in pictures for a gigapixel-scale panorama, then use off-the-shelf stitching software to combine the images into one very high-resolution panorama for upload.

Once you create your free account, you can download our free upload tool to enable you to take any panoramic, high-resolution image and add it to the GigaPan sharing site for community exploration, annotation, and discovery.

In Gigapan, you can use the toolbar on the left to pan the view you like.
You can submit own photos and use gigapan to help you create the panoramic experience,
then you can share it to your friends.

You can add Gigapan service on Google Earth too. Here is what I read and try out!
Below is the example of Meteor Crater, Let's click on the link below the title.
You will be zoomed to the point and you can take a look how large the crater and environment around the crater! 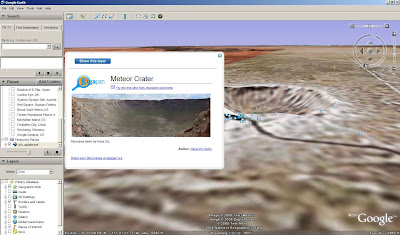 Use the pan tool on the right top or drag the box on the top right to pan around! 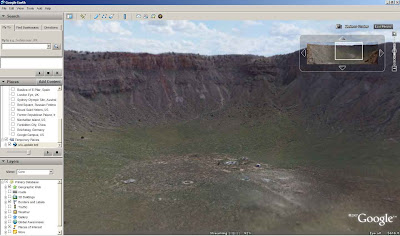 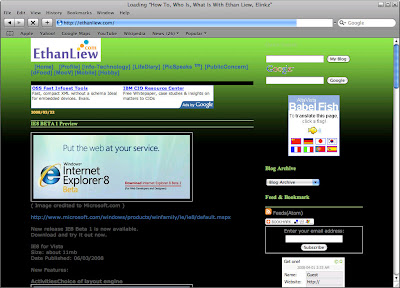 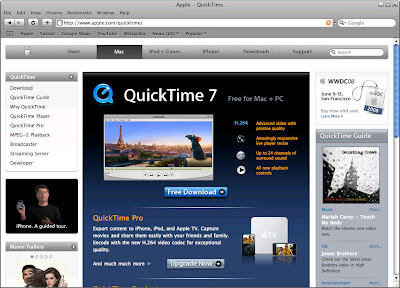 New release IE8 Beta 1 is now available.
Download and try it out now. 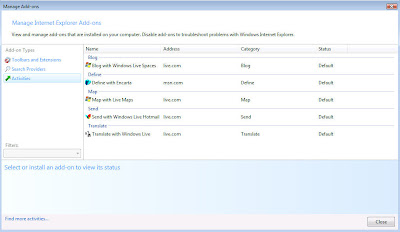 Activities are contextual services that provide quick access to external services from any webpage. Activities typically involve one of two types of actions:

WebSlices
Web sites can expose portions of their page as a WebSlice that users can subscribe to and bring that content with them on their links bar wherever they are on the web.
Users receive update notifications when the content changes.


Choice of layout engine
Internet Explorer 8 Beta 1 will ship in standards mode by default. However, three different rendering modes that may be set using the X-UA-Compatible header:
The Internet Explorer 8 layout engine is built to be cascading style sheets 2.1 compliant, enabling web developers and designers to write their pages once and have them render properly across all cascading style sheets 2.1 compatible browsers.

However, Microsoft is not finished—hence, Microsoft is seeking feedback from developers working with Internet Explorer 8 Developer Beta 1.

HTML improvements
Many cross-browser inconsistencies have been fixed in Internet Explorer 8 Beta 1, including:

Microsoft has heard your feedback that Internet Explorer needs its own built-in Developer Tools, so the new Developer Toolbar enables developers to quickly debug HTML, cascading style sheets, and JavaScript in a visual development environment that is included with the web browser.

Developers can quickly identify and resolve issues because of the deep insight the tool provides into the Document Object Model. The Developer Toolbar also allows the layout to be changed on the fly so that each rendering scenario can be tested thoroughly.


Improved security
Internet Explorer 8 will build upon Microsoft's security and privacy investments to address users' security concerns. In the months ahead, additional new protection, prevention, and privacy services will be added.

As part of an ongoing commitment to privacy and security, Microsoft is making enhancements to the phishing filter in Internet Explorer 8 to provide additional protection against evolving threats to the consumer.

What Is Domain Highlighting?
Domain Highlighting is a technology that highlights the top level domain in the address bar, allowing users to quickly confirm that the website they are visiting is the site they intended to visit.
The domain name is in bold and black font, standing out from other characters in the URL which are gray.

May be the URL below able to give you a hand to make your site appear on major search engine such as Google.com, Live.com, Yahoo.com.

Yet, if you wish your site to have a better ranking. You need to research more about SEO ( search engine optimization ) knowlege.

Feel free to let me know if you have other major search engine submission site.